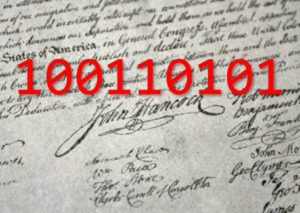 The days when a signature was not considered legally valid unless it was an original signature signed in blue ink are a thing of the past. Digital signatures have now surpassed handwritten ones as considered to be more reliable. How is that possible?

However, a digital signature is a completely different animal in that it offers both signer and document authentication. How this is done, is that the signer is given a private key and password that is only accessible to him. It is also specific to the particular document that he is intending to sign. The only way that the signature could be forged, would to be if the signer lost control of the private password and key. This is, in essence, his unique document fingerprint. If there is any tampering with this fingerprint, the digital signature will become invalid. The software also creates a time-stamped master fingerprint so that we know exactly when the document was digitally signed. The reason why this is revolutionary, is because it allows us to know the exact time when the signature was made. We can then compare the document that was signed at that precise moment to the present one to determine if it has been altered in any way. If the document is the same, the signer cannot later allege that the document has been fraudulently altered since the time it was signed. Up until now, this has been a frequent problem in contract dispute cases and a difficult one to prove.

Over the years as a commercial contract litigator, I have had the unfortunate task of having to prove the authenticity of signatures on a legal document where the defendant was claiming his signature was forged. This involved numerous handwriting experts at considerable cost and a tremendous amount of “he said/she said” witness courtroom testimony. The whole process was not only costly, but also highly imprecise. This new technology not only solves this dilemma, but fulfills our new trend of growing dependence on electronic transactions.

Several electronic signature companies are popping up to provide the software and platform necessary to help customers digitize documents, automate processes and go paperless. In our neck of the woods, Citrix recently acquired RightSignature, which is a cloud based electronic signature company located in Santa Barbara. A quick Internet search revealed at least a dozen others.

All of these companies are governed by a single federal body of law. At the beginning of digitized documents, the body of law that governed the transaction varied from state to state. However, to deal with this growing problem, President Clinton signed the Electronic Signatures in National and Global Commerce Act (E-Sign) on June 30, 2000. The enactment of E-Sign had broad reaching ramifications because it preempted state laws governing electronic transaction requirements and created a uniform federal law to be followed by everyone.

With these technological advances in the ability to authenticate the signer through the use of private keys and passwords, as well as to be able to determine the exact moment the document was electronically signed, legal battles over forged documents are becoming a thing of the past.