Does a Declarant Have to Specify the Place Where They Signed a Declaration? 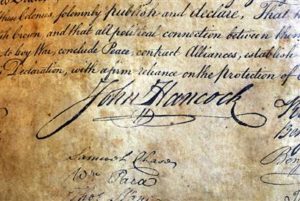 As a participant in legal proceedings in California State courts, you may at some point be asked to sign a declaration. The declaration may be used as admissible evidence (your testimony) in certain proceedings without requiring your personal presence in court. For example, declarations can be used to support motions for summary judgment.

When signing a declaration, the declaration form may require that you identify the city and state (the “place”) where you signed. It may look like this:

Do you always need to identify the place where you signed? The answer is “No”: If you want to remain mysterious as to where you were when you signed, just make sure that you declare under penalty of perjury “under the laws of the State of California” and your declaration will meet the requirements of California law even if you don’t say where you signed. Like This:

Declarations in California are governed by California Code of Civil Procedure Section 2015.5. This statute allows for both of the declaration forms reproduced above. Example 1 is allowed by Section 2015.5(a) “If executed within this state”. Example 2 is allowed by Section 2015.5(b) “If executed at any place, within or without this state”. The purpose of the statute is to ensure that the declarant’s testimony is governed by California’s perjury laws (as opposed to the perjury laws of some other state or country).

If you identify the “place” that you signed a declaration and it is “within” California, then Section 2015.5 does not require you to declare “under the laws of the State of California”. If you were in California (e.g. “San Bernardino, California”) when you signed the declaration (and you specify that place), then the words “under penalty of perjury” alone are sufficient to subject you to California’s perjury laws.

Most declarations in California already come with the language “I certify (or declare) under penalty of perjury under the laws of the State of California that the foregoing is true and correct”. Therefore, if you see that language, don’t be shy about leaving out the place where you signed if you wish.